Strauss Zelnick is CEO of Take-Two Interactive, one of the biggest game publishers in the world. That’s why it was interesting to hear his take on the newest gaming technologies and trends. He weighed in on nonfungible tokens (NFTs), the metaverse, and virtual reality.

Zelnick spoke at our GamesBeat Summit Next event with Mike Vorhaus, founder of Vorhaus Advisors, about reaching mass-market adoption for games. You wouldn’t think that Zelnick has to worry about upstarts trying to disrupt his company.

Zelnick’s company and its labels such as Rockstar Games and 2K generate billions of dollars from huge franchises such as Grand Theft Auto, Red Dead Redemption, NBA 2K, Civilization, and Borderlands. In fact, Grand Theft Auto V has sold 155 million copies since 2013.

But Zelnick said the lesson of running the company for many years is that “my view is you have to be the disruptor.”

He added, “If you’re sitting in the seat, and you’re worried about cannibalization, you should be the one trying to eat your own lunch. Otherwise, someone is going to eat your lunch for you.”

Those lessons come from working at companies in movie, music, new media, and games divisions throughout his career.

In 1993, then president of 20th Century Fox, Zelnick left the film business to be an entrepreneur at Crystal Dynamics and joined it as its CEO, focusing on the cutting edge 32-bit video game business. That was a big personal career risk and Zelnick said he never looked back.

Vorhaus asked him how to cut through the hype in analyzing a new opportunity. With regard to a new distribution technology, he said you have to look at quality, convenience, and price. MP3 music had low quality, but its price was low and was exceedingly convenient — and it disrupted traditional music businesses.

“Fewer than two dimensions, you’re going to fail,” he said. 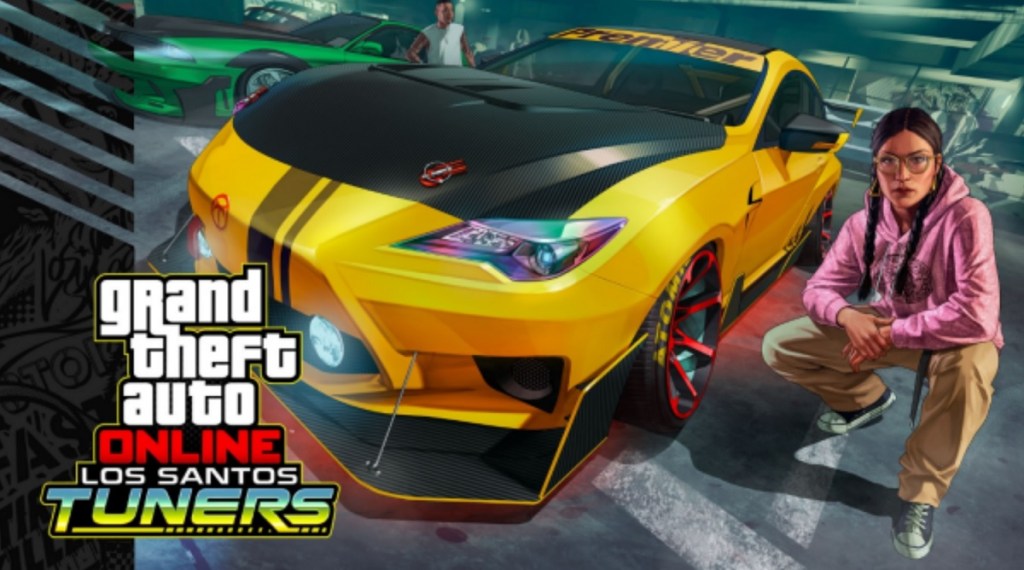 In brand new technologies, you focus on different things. With virtual reality, he focused on the challenge of putting on a headset, occluding your vision and hearing, dealing with the nausea that many people feel in the new medium, and wandering around a virtual world.

“I’m not sure I find an entertainment application there,” he said. But he said he saw both medical and military applications for it.

As for the metaverse, he said, “As tempting as it is to make a snarky remark about it, I’ll avoid that and take it head on. If what the metaverse means a digital re-creation of our daily lives, including transacting, being entertained, working, communicating, buying, selling — if that’s what it means in a digital representation, I’m struggling to see why that activity is powerful.”

He said we don’t create fake play worlds where we live, except maybe for Halloween or a cosplay event. We don’t do it 24/7.

“I still think most people’s definition of the metaverse is a warmed over version of Second Life, and Second Life was an abject failure,” Zelnick said. “And to the extent that we are seeing expressions of the metaverse in entertainment — for example Grand Theft Auto Online and Red Dead Online, or, to use someone else’s properties, Roblox, Fortnite — they exist.”

He said, “They feel a lot like the metaverse to me. I’m not sure why Facebook needs to to spend $10 billion and hire 10,000 employees — OK. But if it means something more than that, I have yet to see an analogy in human behavior that truly resonates.” 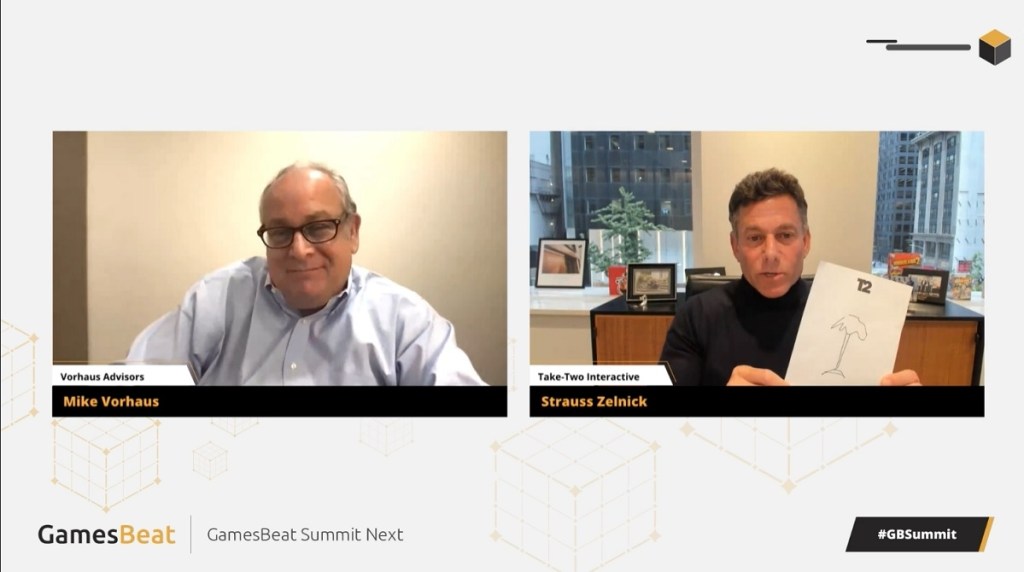 On the other hand, Zelnick is a fan of NFTs, which use the security and transparency of the digital ledger of blockchain to authenticate one-of-a-kind collectible digital items.

“We know that people love to collect things,” he said. “We know that people value rarity. What makes a collectible valuable? An intersection of a perception of underlying value and quality, and rarity. NFTs can offer that. They can offer a digital version of that. There’s no question people value digital goods. It’s digital, rare, and collectible.”

He noted that Beeple’s auction of NFT art that garnered $69 million was driven by the notions of rarity and the perception of it as art. He showed a piece of paper on Take-Two letterhead of a palm tree he drew.

“I promise you this is the only one of these that exists,” he said. “It’s rare. It is very, very rare. Is it valuable? I think not. One of my colleagues here at Take-Two turned it into an NFT. It’s available for sale if you want it, Mike.”

He said he believes in NFTs selectively. Vorhaus asked where he could buy the NFT, and Zelnick smiled and said talk to him later. Vorhaus said he agreed with everything he said. 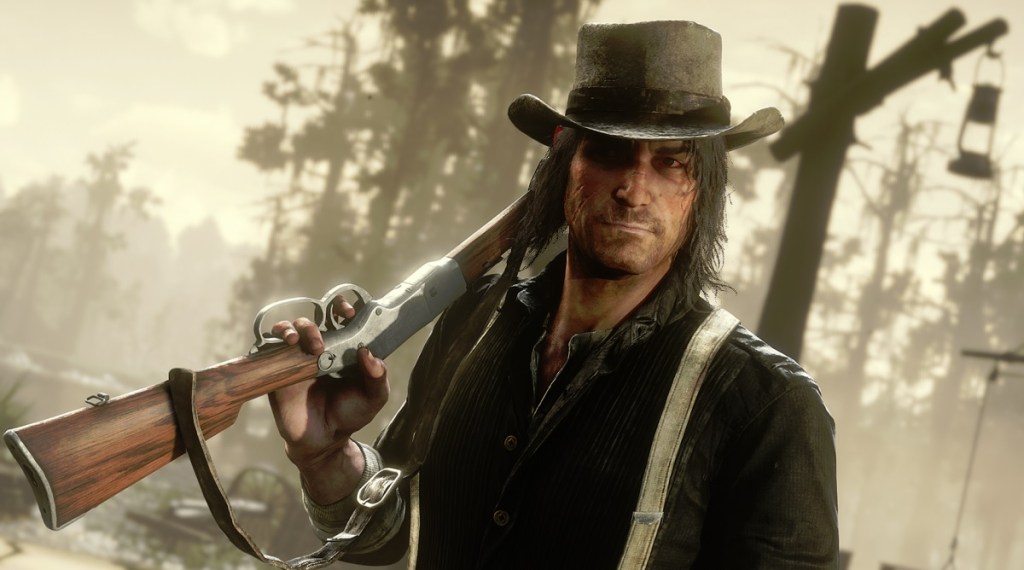 Zelnick also noted that augmented reality has worked already with titles like Pokemon Go. It doesn’t disrupt your hearing or vision. It doesn’t make you nauseated. Zelnick asked if it is compelling by itself, he said he felt the same way about electricity. It comes in very handy.

“I think it depends on the use,” Zelnick said.

Asked what young people should do, Zelnick said you should focus on what you really want in order to be successful, as opposed to what your parents want, your friends think is cool, or what would generate a large starting salary.

“You owe it to yourself about where you want to be in the long future ahead and make choices that are in service of that goal,” he said. “Find an intersection of what you are really good at and what you like to do. I stumbled around until I found my first job.”

As for how to make a hit game, he said, “Get in business with the very best talent on earth. Make sure they have unlimited resources to pursue their passions and insist that they actually pursue their passions. And when given a choice of supporting their goals or not, support their goals. And make sure you have a balance sheet to support that. Have worldwide marketing distribution that does the best job anyone can do of bringing those games to market. Then you enhance your odds of making a hit. Easier said than done.”

Microsoft is bringing a managed Grafana service to Azure