Porsche cars often appear in video games, but for the first time, the automaker has designed a car specifically for Gran Turismo 7.

Sony’s latest Gran Turismo title debuts on March 4, 2022, and it will feature the all-electric concept car that you wouldn’t be able to drive on the streets, and it has some futuristic features that would only work in a video game.

Deniz Keskin, director of brand management and partnerships, said in an interview with GamesBeat that the company’s car designers spent about three years working on the design, creating it as if they were making a real car. They worked with Sony’s game studio, Polyphony Digital, to put it in the right format to make it one of the “hero cars” of the game.

The Gran Turismo game series has featured Porsche sports cars since 2017, most recently the Taycan Turbo S. For the launch of the game’s seventh edition, Porsche has, for the first time, developed the Porsche Vision Gran Turismo for the virtual world of the game.

“We approached it really like a normal vehicle project, which is the typical Porsche way to do that,” Keskin said. “It’s kind of a concept car for perhaps the year 2030. So it has a futuristic feel to it. But we have tried to be realistic in the sense we have not put anything on the car that is not feasible. It’s a fully electric car. It’s also pretty compact and nimble.”

It is the sports car manufacturer’s first concept study created specifically for use in a computer game. It will be available exclusively in Gran
Turismo 7 for the PlayStation 4 and PlayStation 5. The biggest challenge is to make sure it looks like a Porsche and expresses what the brand stands for.

“The appeal of a Porsche comes from its purist design,” said Kazunori Yamauchi, president of Polyphony Digital, in a statement. “And in terms of engineering expertise, both we and Porsche follow the same perfectionist philosophy. We share the same passion for racing and are looking to the future of the car.”

Keskin said the team was freed from the constraints of developing models for series production, and so they were able to put new ideas for a Gran Turismo concept car into practice.

“A vehicle designed purely for the virtual world opens up exciting possibilities for us that are otherwise heavily regimented in a regular design process for a series production car,” said Michael Mauer, vice president of style at Porsche, in a statement. “Projects such as the Porsche Vision Gran Turismo are particularly valuable for us in the creative process. Further developing our clearly defined Porsche Design DNA and exchanging with designers from other industries is an important part of our work.”

The lights in the particularly purist front and the integrated air intakes create a visual link to the design language of the Taycan – a nod to the car’s purely electric drive. The rear is adorned with a markedly narrow light strip – a further development of the light signature that is familiar from the 911 and Taycan models. The clear emphasis of the brand identity continues in the interior, with the curved hologram display, tailored to the driver, which appears to float above the steering wheel. The low seating position underscores the car’s dynamic feel. The realistic surface appearances in the interior also play a major role. It has holographic displays that show different driving data.

“We spent a long time considering the right material design consisting of carbon and titanium. The aim was to reduce weight while increasing performance,” said Markus Auerbach, head of interior design at Porsche, in a statement. “In addition, sustainable aspects also play a role in forward-looking projects. For example, we only used entirely vegan materials in the concept car.”

In addition to purely design-related themes, there are also new functions that contribute to a strong sports car feeling, with players experiencing haptic feedback via the controller, which mimics the feel of the steering wheel. This fast and direct feedback is reminiscent of a real racing car, the company said.

Expanding its gaming activities also has strategic significance for Porsche.

“We can engage young and digital target groups in the place where their automotive dreams are born: the world of gaming,” said Robert Ader, vice president marketing at Porsche, in a statement. “The partnership with Polyphony Digital and ‘Gran Turismo’ is a perfect fit for Porsche because motorsport – whether real or virtual – is part of our DNA.”

Porsche stands for authentic and emotive experiences. In this context, video games and the virtual world offer new opportunities to make sports cars interactive, and to make driving them an accessible experience. For this reason, the brand has been cooperating with various companies from the gaming industry for several years and these activities are now an integral part of the marketing mix. The overriding goal is to create a lasting brand experience. Sony’s Polyphony Digital has been making Gran Turismo games since 1997.

Some years back, Porsche introduced a real car for the first time by announcing it would be in a Forza video game for Microsoft’s Xbox, and Keskin said that went well in terms of positive feedback. And it also debuted the previous car on Sony’s platforms.

“We are pretty excited, and it also extends to this whole community around esports, as gaming is a really important segment to us,” Keskin said. “There are a lot of really enthusiastic young people that we want for a positive early brand exposure.” 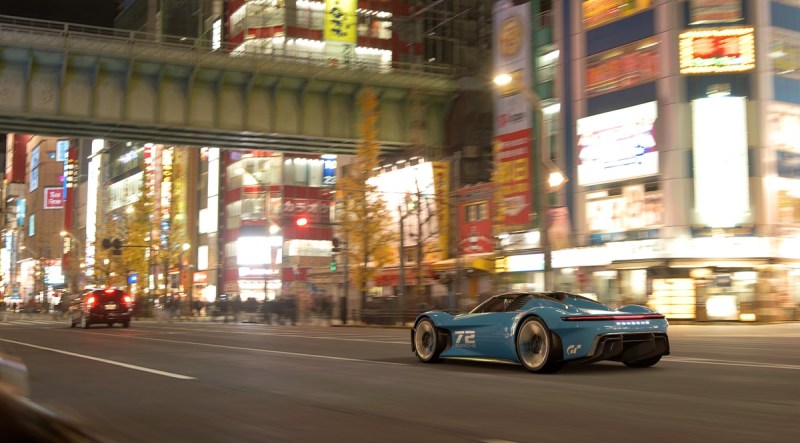 The designers focused on designing a video game, with polygons and textures, as opposed to designing a real car, where there is a lot of material under the hood that you never see in a game. But it has a fancy interior and lots of things for gamers to admire from any angle.

“You will see that it looks like a full-fledged concept car that you would see in an auto show,” Keskin said. “We haven’t made any compromises in how we approach this product.”

Keskin said that for his generation, it is unusual to equate the value of digital goods with those of physical goods. But his young son doesn’t think twice about assigning the same value to digital objects, like sins in video games, as physical objects.

“This opens up a very fascinating universe of questions in gaming or esports for us to exploit,” he said. “At least in terms of what that means for the way we present ourselves as a brand. Designing the first Porsche car ever for the digital space shows that we want to get it right and make our contribution here.”

As for the return on investment for putting designers to work on a concept car for three years, Keskin said that he is fully convince that will come through the benefits from the video game alone, as it is going to be the hero car and it is likely to be highlighted in marketing and esports events. The exposure for Porsche will be pretty big, considering how many millions of copies Sony usually sells for each installment.

“I think also the community will appreciate it. And then there is the long-term that is very difficult to measure,” Keskin said. “In terms of putting this to reality, there are road regulations. So you wouldn’t be able to do this car exactly the way we designed it for the virtual space. But my colleagues in the design studio will tell you that it frees up a lot of creativity if you are not subjected to certain constraints. And as a marketing guy, you know, for me, the nicest thing that could happen is that in five years, six years time you see some world going Porsches, and then you will recognize some little elements and little cues and inspirations that maybe have come from that car. If that happens, then, you know, I think that’s a very cool, incredible story. And I’d be very happy to see that happening.”

How AI is quietly revolutionizing the back office