Netgear introduced a slate of WiFi 6E routers in October, and now it is bringing the new wireless broadband technology to its Nighthawk gaming routers.

The Nighthawk RAXE300 Tri-band WiFi 6E Router provides speeds up to 7.8 gigabits pers second (Gbps) for wireless home networks. It leverages the newly available 6Ghz band of the radio spectrum, which is making possible a new generation of routers that can keep up with growing online usage.

Netgear showed off the new router as part of a bunch of new products at the tech trade show CES 2022 in Las Vegas.

Netgear product manager Max Wu said in an interview with GamesBeat that research shows 50% of Americans are working from home and internet usage is up 93% due to this trend.

“People are upgrading their home internet service to meet their new demands,” he said. “The best WiFi solution capable of keeping up is WiFi 6E, which comes with wider channels, more spectrum, and much lower latency.”

The pandemic has accelerated the world’s dependence on WiFi as working, learning and video streaming from home has continued to place unprecedented demands on home WiFi networks, Netgear said.

Devices in these ultra-connected households have been in a constant contest for bandwidth on crowded WiFi networks, stressing the need for the new, clean 6Ghz band.

The new router supports eight WiFi streams and provides gigabit-plus WiFi speeds throughout homes of up to 2,500 square-feet. The router has six pre-optimized antennae for WiFi signal strength, coverage and performance. It also has a 2.5 Gigabit Ethernet port that can be used to provide gigabit-plus internet connectivity to an internet modem or other devices.

There are also five more Gigabit Ethernet ports for wired connections to other home devices and IoT hubs.

“Users now have more options to deliver their gigabit-internet speed via wired or wireless based on their preferences,” Wu said.

The Nighthawk RAXE300 Tri-band WiFi 6E router will be available within the first quarter of 2022 from Netgear.com and other resellers for $400.

Netgear is also launching its Game Booster service, which enables Netgear Orbi home networking products to use the same tools found on Nighthawk Pro Gaming routers to enhance network performance and minimize lag for gamers. Gamers will be able to access it via the Orbi app.

Netgear’s research among Orbi users has shown that greater than 60% of surveyed households have at least one gamer, with a significant number of those gamers playing on a console or PC. For these players, Netgear’s Game Booster service aims to give them an edge by reducing lag, or interaction delays in multiplayer games.

The Netgear Game Booster, powered by DumaOS, includes three core components controlled from the Orbi App. It has a Ping Heatmap and Geo-Filter, which gives players the power to identify and choose the fastest game servers for their preferred games, thereby reducing ping by up to 93%.

It also helps prioritize network bandwidth to gaming devices and applications with a Network Priority feature, which prioritizes bandwidth for games. 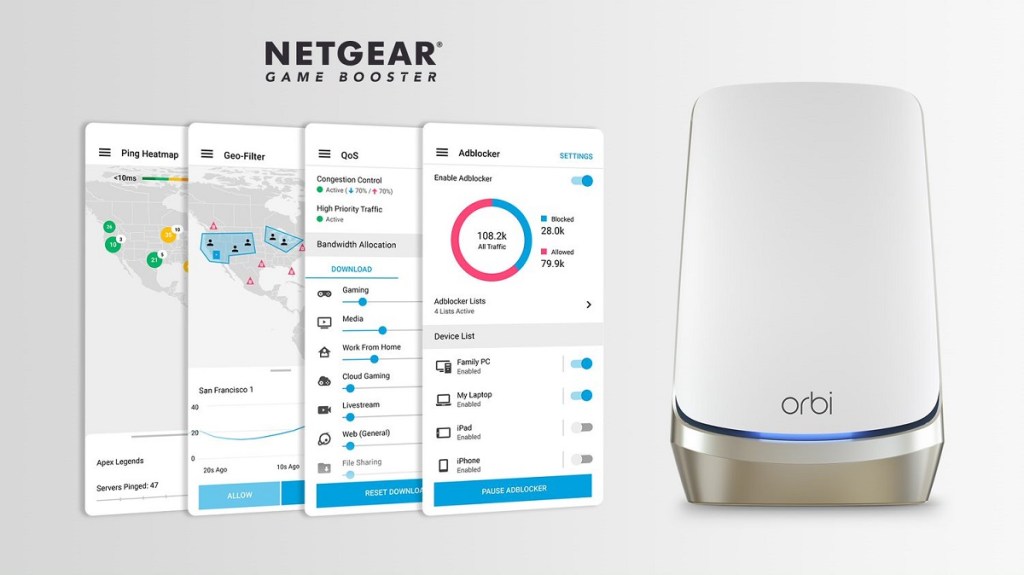 Game Booster also includes Adblocker, a new feature on the router, benefiting any device on the network, not just the gaming console or PC. Not only does Adblocker block unwanted ads, but it also limits tracking from various web sites.

The blocklist is updated regularly and users can customize both the domains to be blocked and the devices it is active on through the Orbi app. The Netear Game Booster will be available initially to Orbi Tri-band WiFi 6 mesh systems (series 750 and 850) and on the Orbi Quad-band WiFi 6E system (series 960) soon after with membership on the Orbi App. The service launches in the first quarter of 2022 and will cost $50 per year.

Netgear also unveiled its Orbi Pro Mesh System, which provides wireless internet coverage for up to 5,000 square feet and supports up to 75 devices simultaneously. And it also launched PoE Switch devices for small and medium businesses as well as work-from-home professionals.

AI in robotics: Problems and solutions

Big tech vs. data privacy: It wasn’t meant to be this way