Graphics don’t matter until they do.

Sure, gameplay will always be more important. But sometimes a game can be so pretty that it helps you appreciate an experience that you would normally feel mild about. For example, I’m not the biggest racing game fan in the world. When I do enjoy a racer, it’s usually a more arcadey experience like Ridge Racer Type 4 or the more recent Cruis’n Blast.

When it comes to more simulation-based racing games, I tend to get bored after awhile. I’m not a car guy. I can’t tell a lug nut from a spark plug. But Forza Horizon 5’s world is so beautiful that I’m more willing to play and learn just so I can continue existing in its dazzling vistas.

Sometimes, I like a game just because it’s fun to vibe with. Forza Horizon 5 is one of the games. This racing wonderland version of Mexico is charming, thrilling, and fun to explore. From the volcanic mountains, the vibrant towns, and the glittering oceans, each square mile of this open playground offers amazing sights.

And on the Xbox Series X, it all looks crisp and realistic. I mean, triple-A graphics have already gotten pretty good at replicating automobiles and landscapes, but this is as impressive as it gets. Of course, there are some compromises. The few character models that populate the game’s world and cutscenes don’t look anywhere near as good as the cars and trees. Now, that is a good prioritization of resources for an open-world racing game, but those characters do stand out when everything else looks so amazing.

I hope all this talk about the graphics doesn’t give them impression that I don’t think Forza Horizon 5 is any fun. It is. You have a giant catalog of cars to collect, and collecting them is satisfying and rewarding. And there are a lot of ways you can go about it. You can get cars by earning points and leveling up, which then lets you spin a lottery wheel that can give you a chance at a vehicle. You can also unlock cars by performing certain feats, like winning specific races or knocking over a certain amount of safety cones (take that, safety!). And, of course, you can always go the marketplace and just buy them.

Actually racing those cars can be a bit more hit or miss for me. The cars themselves feel great. They have a wonderful weight and kick to them that makes them feel like the powerful machines of locomotion that they are. Sometimes, however, I’m just not sure why I’m doing so well or so poorly in a race. Sometimes I jump out to an early start and have no trouble maintaining it. Other times I can’t pass the fifth place car in front of even if I have practically the whole race to do it. 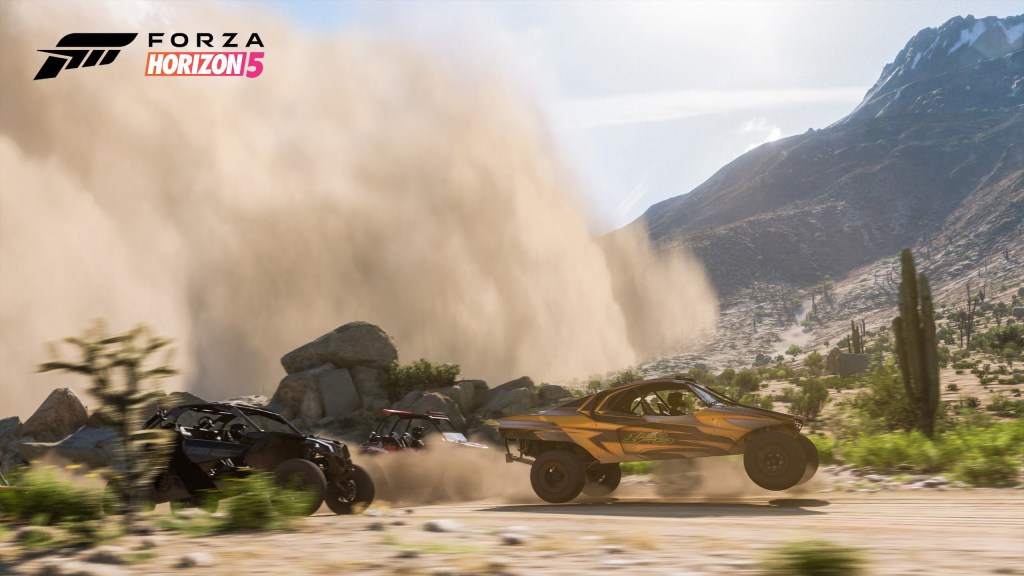 This is likely a me problem. I just don’t know enough about cars or real racing to know what I should be doing. But with Horizon seemingly taking a lot of the guess work out of the equation, like by recommending what cars I should use, I’m still not sure what I need to do to improve as a racer. Sure, the game will offer to lower the difficulty, but that’s not what I want. I want the game to teach me how to be better.

I prefer the larger-than-life showcase events to the normal races. These have you doing Michael Bay-esque (is that a dated reference? Let’s say Fast and Furious-esque) ridiculous activities like racing trains. These only make up a small percentage of the Horizon experience, however. Most of the game will be exploring the open world or racing. That’s fine. I love exploring the open world, and I do enjoy the racing enough that it doesn’t feel like a chore, and that’s high praise from someone like me who prefers his racers to be less sim-based.

I just wish that the game featured more over-the-top antics.

When it comes to past Forza Horizon games, I tend to bounce off them rather quickly. But I’ve been sticking around with this one. Yes, it is just that darn pretty. Its beauty encourages me to spend a longer time in Mexico, during which I eventually become a better Forza racer (even if I feel like the game could be doing more to help me learn).

Maybe this will be my first step into becoming a true racing sim fanatic when the eight Forza Motorspot comes out. Or maybe I’ll retreat back to my PlayStation for some more Ridge Racer Type 4. OK, that is probably still what’s going to happen.

Forza Horizon 5 comes out for Xbox Series X/S, Xbox One, and PC on November 9. Microsoft gave us an Xbox code for this review.

Black swans events are shaping the cybersecurity present and future