DeepMind, the AI lab owned by Google parent company Alphabet, today announced that it has acquired and released the MuJoCo simulator, making it freely available to researchers as a precompiled library. In a blog post, the lab says that it’ll work to prepare the codebase for a release in 2022 and “continue to improve” MuJoCo as open-source software under the Apache 2.0 license.

A recent article in the Proceedings of the National Academy of Sciences exploring the state of simulation in robotics identifies open source tools as critical for advancing research. The authors’ recommendations are to develop open source simulation platforms as well as establish community-curated libraries of models, a step that DeepMind claims it has now taken.

“Our robotics team has been using MuJoCo as a simulation platform for various projects … Ultimately, MuJoCo closely adheres to the equations that govern our world,” DeepMind wrote. “We’re committed to developing and maintaining MuJoCo as a free, open-source, community-driven project with best-in-class capabilities. We’re currently hard at work preparing MuJoCo for full open sourcing.”

MuJoCo, which stands for Multi-Joint Dynamics with Contact, is widely used within the robotics community alongside simulators like Facebook’s Habitat, OpenAI’s Gym, and DARPA-backed Gazebo. Initially developed by Emo Todorov, a neuroscientist and director of the Movement Control Laboratory at the University of Washington, MuJoCo was made available through startup Roboti LLC as a commercial product in 2015.

Unlike many simulators designed for gaming and film applications, MuJoCo takes few shortcuts that prioritize stability over accuracy. For example, the library accounts for gyroscopic forces, implementing full equations of motion — the equations that describe the behavior of a physical system in terms of its motion as a function of time. MuJoCo also supports musculoskeletal models of humans and animals, meaning that applied forces can be distributed correctly to the joints.

MuJoCo’s core engine is written in the programming language C, which makes it easily translatable other other architectures. Moreover, the library’s scene description and simulation state are stored in just two data structures, which constitute all the information needed to recreate a simulation including results from intermediate stages. 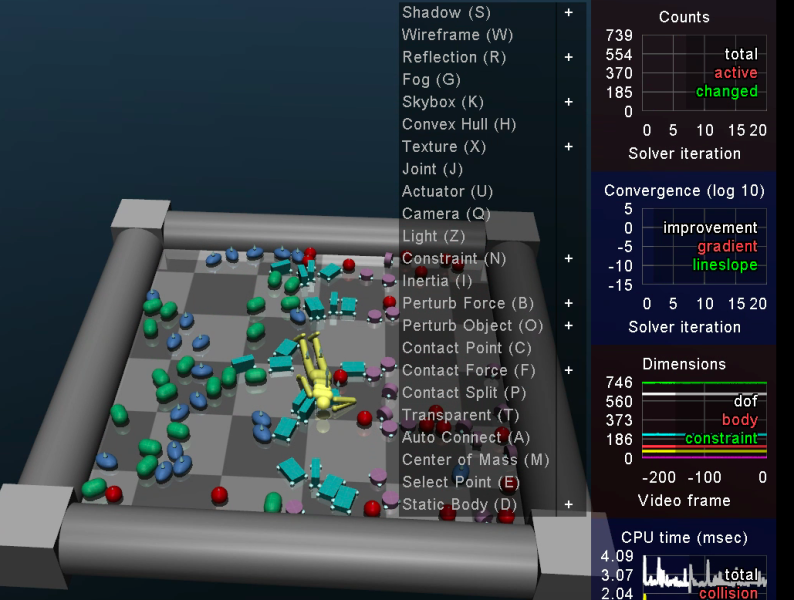 Of course, no simulator is perfect. A paper published by researchers at Carnegie Mellon outlines the issues with them, including:

Overcoming these is a grand challenge in simulation research. In fact, some experts believe that developing a simulation with 100% accuracy and complexity might require as much problem-solving and resources as developing robots themselves, which is why simulators are likely to be used in tandem with real-world testing for the foreseeable future.

MuJoCo 2.1 has been released as unlocked binaries, available at the project’s original website and on GitHub along with updated documentation. DeepMind is granting licenses to provide an unlocked activation key for legacy versions of MuJoCo (2.0 and earlier), which will expire on October 18, 2031.

DeepMind’s acquisition of MuJoCo comes after the company’s first profitable year. According to a filing last week, the company raked in £826 million ($1.13 billion USD) in revenue in 2020, more than three times the £265 million ($361 million USD) it filed in 2019.