The mobile game will come out in 2022, and Ludia (now owned by Jam City) has a license from Warner Bros. Interactive Entertainment on behalf of DC.

The game will cater to fans of DC comics with an original narrative featuring an all-star cast of beloved superheroes and supervillains including Batman, Superman, Wonder Woman, the Joker and Harley Quinn.

DC Heroes & Villains will debut early next year on the Apple App Store and Google Play. Starting today, players can pre-register for access to the game and receive special bonus items at launch, at www.dcheroesandvillains.com.

DC Heroes & Villains brings iconic locations like the alleyways of Gotham City and the depths of Atlantis to life. A mysterious pulse has stripped away all superpowers and it will be up to players to recruit the ultimate power team, from both sides of justice, to stave off total extinction.

Players will need to be strategic as they navigate through the robust gameplay of DC Heroes & Villains, filled with challenging single player match-3 battles and team events where they will need to rally their guildmates to defeat bosses for epic rewards. Scheduled live events including PVP matches and Guild Raids will bring DC fans from all over the world together to engage in combat for exclusive rewards in-game. 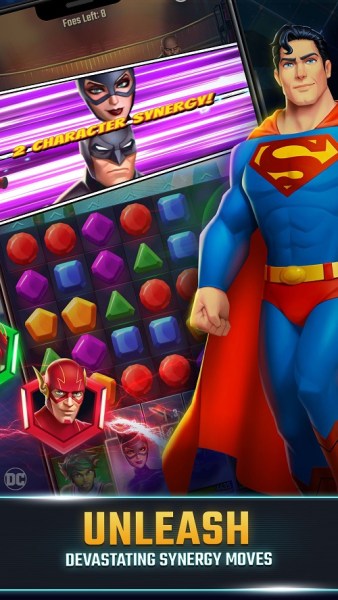 “We are exceptionally proud to announce our newest title, DC Heroes & Villains,” said Alex Thabet, CEO of Ludia, in a statement. “This game showcases the best of Ludia, with engaging gameplay and innovative technologies that are the hallmark of our award-winning games. We believe this will give DC fans a completely new perspective of the characters, environments and lore they love.”

AnalogueOS turns Analogue Pocket into 'The Hitchhiker's Guide to Gaming'

The RetroBeat: Consoles that should be in Nintendo Switch Online's Expansion Pack